More than once during the writing of Agatha Christie on Screen I had someone say to me, ‘I haven’t seen an Agatha Christie film – which one should I watch?’. It’s an entirely reasonable thing to ask, but also tough to answer, because the films and TV adaptations generally offer very different balances of characters, incident, plot, mystery and (often) comedy – and different audiences react to these elements in different ways.

Although my book isn’t entirely devoid of opinion, when I was writing it I decided that as this was a history of how Agatha Christie’s stories were brought to screen, readers were not necessarily interested in what I had to think. I was particularly aware that my opinion differs from many Agatha Christie fans, and casual audiences, and I had to be respectful of that, and not let my own opinions weigh too heavily on my discussion of the different productions.

So, having now finished the book, allow me to indulge in a very personal blog post where I can tell you what I really think!

Before I start, there are three omissions that some of you may be surprised by and I want to acknowledge. Firstly, the René Clair adaptation of And Then There Were None from 1945 – a film that has never really worked for me, being rather lacking in suspense and feeling very old fashioned for the time. It is probably the best Christie adaptation to that point, but  has been surpassed many times since. 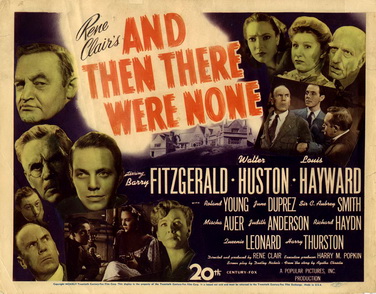 Secondly, none of the films starring Margaret Rutherford as Miss Marple appear. While I don’t despise the films as violently as some, I also don’t think they’re very good. The scripts are thin at best, and they’re all over the place tonally (the line between amusement and irritation is frequently crossed), while the films never feel like any care has been taken with them. Rutherford is the best thing in them, but doesn’t play any Miss Marple I recognise. As I didn’t see them when I was young I have no real nostalgic affection towards them, either, and I think this often plays a part when audiences enjoy them now.

Finally, and most controversially… no, Murder on the Orient Express is not on this list. Sorry. I would say that the opening reel, showing the kidnapping that sets the film’s events into motion, is probably the best sequence in any Agatha Christie film. But the film is then crippled by both Albert Finney’s portrayal of Poirot, who I never believe can be a real person, and the strict adherence to the book’s structure. On the page, we are guided through a maze of clues and contradictions, but on screen Poirot interviewing everyone in turn eventually becomes a bit of a chore.

So, without further ado, my top five:

Witness for the Prosecution (1957)

This list is in no particular order – except for this one. The 1957 Billy Wilder film of Witness for the Prosecution is, for my money, the single best screen adaptation of an Agatha Christie story. There were several early TV adaptations of this short story on both sides of the Atlantic, but it was the success of Christie’s own stage adaptation that really made it a hot property. It was suggested to Alfred Hitchcock, but he was more interested in Dial M for Murder, and after a few wrangles it eventually became a pet project for Billy Wilder.

Writing with Harry Kurnitz, Wilder produced a screenplay that does the near impossible by making one of Christie’s very best stories even better. (A later blog post will give details of a few other adaptations that, I think, manage to surpass Christie’s original stories.) Wilder and Kurnitz add wit and warmth, filling out the characterisation and adding further incident. This includes the flashback sequence that sees Marlene Dietrich’s performance of ‘I May Never Go Home Anymore’ – this has often been derided, but not by me, as I think it’s essential that we see the relationship between the character of Christine, played by Dietrich, and Leonard (Tyrone Power) away from the court case that has seen the latter accused of murder. Although the cast is exceptional, including Charles Laughton and Elsa Lanchester, Dietrich steals the show – especially in one extraordinarily difficult scene (you’ll know which I mean if you’ve seen it). 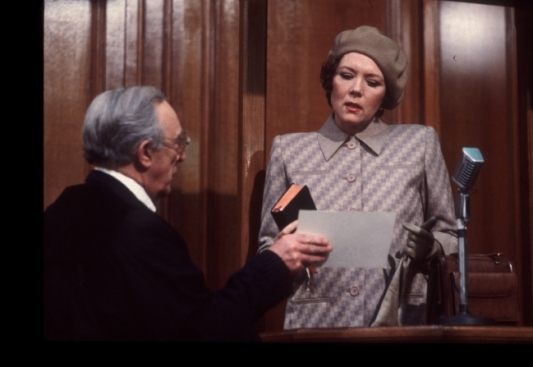 The film was remade as a Hallmark TV movie in 1982 starring Ralph Richardson and Diana Rigg, alongside a host of recognisable British actors. The script was a condensation of Wilder and Kurnitz’s screenplay but, aside from an atmospheric opening, the final product doesn’t rival the 1957 film.

After the success of 1974’s Murder on the Orient Express, the film’s producers John Brabourne and Richard Goodwin looked to find another glamorous Christie book to film. The press reported that the next project was to be Evil Under the Sun, again starring Albert Finney, but Death on the Nile was always the preferred follow up, and Finney was never likely to reprise the role. So it was that, in the end, it took until 1982 for this tale of murderous events on an island made it to the screen, by which point Peter Ustinov was playing Poirot.

This is the best of the high budget film adaptations of this era because it no longer worries about restraining itself from the camp that had only bubbled under the surface to this point. Evil Under the Sun is also a film that feels glamorous, with its beautiful Majorcan locations alongside the highly affected costumes and Cole Porter score, which makes it so much more entertaining to watch. Added to this, the cast are clearly having a ball, especially during the barbs between Diana Rigg’s doomed Arlene and hotel owner Daphne, played by Maggie Smith.

Aside from the pithy put-downs and strong characterisation, Anthony Shaffer’s script balances a particularly complex set of clues and incidents to great effect, while also removing some less effective subplots and sensibly thinning out the crowd of suspects.

Perhaps the scene in which Poirot reveals the workings of the murder goes on a little too long, but the film as a whole is fun, gripping and clever, and what more can you want than that?

I’ve picked A Murder is Announced to represent the BBC’s Miss Marple series, which ran sporadically between 1984 and 1992, but really I am spoiled for choice. There is too much back story to go into here, but Joan Hickson’s Miss Marple is perfect – so perfect, in fact, that those making the later ITV series deliberately cast actresses who would be very different, so as not to invoke direct comparisons.

A Murder is Announced is probably the best overall production of this excellent run of twelve adaptations. It showed that it was possible to stick closely to the book while still making for a highly effective piece of television – even if, at over two and a half hours, it does perhaps run for longer than needed. Alan Plater’s lightness of touch to the script makes the world on screen feel like a real one, rather than a set of suspects waiting to be uncovered.

I was tempted to go for Curtain here, but its inevitably downbeat tone doesn’t seem quite right for a celebratory blog post – I’d rather go to the series’ heyday by flagging up this 1992 adaptation from the Poirot series starring David Suchet. Some days, The ABC Murders might be my favourite Christie, and it certainly hovers in what I consider to be the top tier of her stories. It’s a fantastic premise, of seemingly random murders committed in alphabetical order, with a satisfying resolution.

The real strength of this adaptation is in the emphasis on Cust, a man who we must treat as the main suspect, and whom we even see committing murder at one point… don’t we? Donald Sumpter gives an exceptional performance as this troubled and confused man, and the audience is pleased to learn of his fate at the end.

Alongside this is a set of strong performance from the series’ regulars, and a reinforcement of their relationship, especially when Hastings brings Poirot a rather pungent present back from his travels.

Audiences have their pick of treats from the Poirot series, but this is the best of the bunch.

For the final choice, we come up to date. How nervous were many of us about this adaptation? 2015’s Partners in Crime had not exactly been a huge success, and so expectations were not high for this long overdue take on Christie’s best selling novel, despite the strong pedigree of writer Sarah Phelps. I was lucky enough to see some rushes during filming and was (pleasantly) shocked by what I saw – a lavish production, yes, but also one that was clearly taking this dark tale very seriously. When one person asked me to describe what I saw, I could only say that it looked great… and there was a lot of blood.

This description was to be true of the final three-part adaptation itself. Phelps crafted a brilliantly paced and constructed thriller, with strong (generally repulsive) characters. From this, director Craig Viveiros shot the piece not as ‘an Agatha Christie adaptation’ but a tense, violent, psychological thriller – and he was right to do so.

It was great to see how well received the production was when broadcast, and I hope that this will be an annual tradition of striking, modern, and faithful Christie adaptations.

As ever, much more information on all of these adaptations can be found in Agatha Christie on Screen, which is due out in late 2016, and is available to pre-order now from Amazon UK, Amazon US and most other stores.